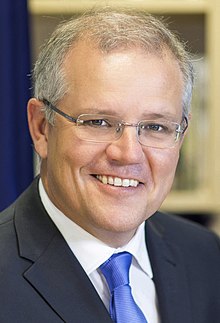 Scott John Morrison was born 13 May 1968 in Sydney.
He studied tat the University of New South Wales (economic geography), and thereafter he worked for the New Zealand Office of Tourism and Sport for a couple of years. He also was managing director of Tourism Australia, from 2004 to 2006.

In 2007, Mr. Morrison was elected to the House of Representatives.

Mr. Morrison is known for his strong defence of Christian values and freedoms. In 2017, when Parliament debated the legalisation of same-sex marriage, he introduced and supported amendments to protect the religious freedoms of faith-based organisations and of independent schools as well as parents to ensure the education of their children in accordance with their religious and moral convictions. All these amendments were defeated.

After same-sex marriage was legalised, Mr. Morrison emphasised the need for legislation to protect the religious freedoms.

Earlier that year, Mr. Morrison vowed to stand up to mockery of Christians.

Mr. Morrison is himself a Christian. Raised within the Uniting Church, Mr. Morrison later became a Pentecostal Christian, and now attends the Horizon Church, which was established in 1949 as a pioneer church plant of the Assemblies of God in Australia. On its website, this church presents itself: Horizon Church (formerly Shirelive) is a Christ-centred, Word-based, Spirit-led church in the heart of the Sutherland Shire.

There are fundamental doctrinal differences between the Reformed doctrine and the doctrine this Pentecostal church adheres to, one of the most important being the teachings about the Holy Spirit and His work, as well as about the covenant and infant baptism. However, when it comes to the issues of same-sex marriage and other social issues that are being dealt with in politics, we may see Mr. Morrison as a solid ally for those who promote a Biblical view on these matters. He also promised to be a strong defender of religious freedoms. It is our prayer that he will continue to do so also in his position as Prime Minister.

Many in the mainstream media do not see Mr. Morrison as part of the conservatives in the liberal party. This may give some hope that the media will look positively at what Mr. Morrison will be doing as Prime Minister. Mr. Morrison may not be a conservative if it comes to economic policies, but when dealing with social issues, he seems to be a solid social conservative. Christians should not identify with either conservatives, liberals, socialists or any other political movement. As such Christians can be ‘liberal’ in certain issues, social (not socialist) in other issues, and conservative again in other matters. If this is how Mr. Morrison will act as Prime Minister, then it is understandable that many in the media have difficulties categorising him as either ‘conservative’ or ‘liberal’ or ‘progressive’.

Mr. Morrison is married and he and his wife have two daughters.

Generally, Mr. Morrison is seen as a good team player and a builder of bridges. He may be the person who is needed to unite the Liberal Party, and, if it is possible, to unite the Australian people. Above all, he is now our new Prime Minister, whom, we believe, is ordained by God to rule over us. Let us show respect to him and pray for him. May God use Mr. Morrison to bring blessings to our country, and may His name be glorified, by the way in which Mr. Morrison fulfils his office of Prime Minister.